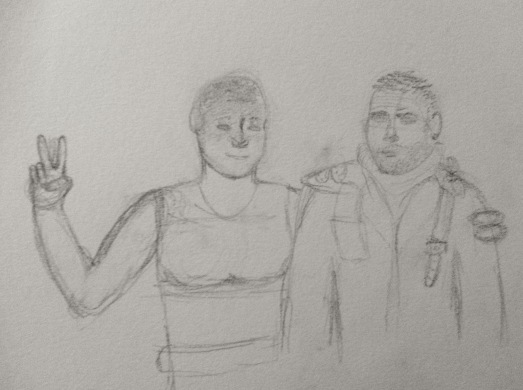 As always, heads up that there are some spoilers ahead. Y’know what? Go see the movie first. Go see it. It’s brilliant.

There’s a scene around the middle of the Mad Max: Fury Road that I think sums up what makes the film so great. The appropriately named War Rig (a jury-rigged armed, armoured and supercharged oil tanker), carrying (the also appropriately named) Furiosa, Wives, a changed Nux and a less reluctant Max, has become bogged down in the wet soil and sand of what we might assume is a desolate former swamp. Behind them the war lord in charge of the Bullet Farm (an ally of primary antagonist Immortan Joe) and only one in possession of a vehicle with the treads necessary for traversing the treacherous terrain quickly, is closing in. Bullet Farm. It’s a clever name that draws upon an offhanded remark by one of the wives, the Capable I think it was, that one of her relatives used to call bullets “antiseeds. Plant one and watch something die.”

The sun set some time before, casting the world in a blue filter that marks a striking contrast against the reds and yellows of the wasteland during the daytime and forcing the (again, appropriately named) Bullet Farmer to probe the darkness with a bright white spotlight (and randomly directed shots from his enormous arsenal). Planning to slow down the progress of their pursuer Max kneels down with a scoped rifle, takes aim at the spotlight, fires, misses. Again, he takes aim, fires, misses. Is informed that he only has two shots left for that rifle. For a third time, he takes aim, fires. For a third time he misses. One shot left.

Before he can take it, before he can hit or miss, Furiosa comes up behind him. Max glances at her, back down the scope, then hands her the rifle. We, the audience, already know she’s a brilliant shot with this weapon. We saw her using it to pluck motorcyclists out of the air like clay pigeons as they jumped over the War Rig, then use it to pick off an approaching straggler well in the distance. What makes this scene something special, why it is such a fantastic demonstration of the evolved relationship between the characters and their combined strength is that Max doesn’t get up. He remains kneeling, allowing Furiosa to rest the stock of the rifle on his shoulder as she takes aim at the approaching spotlight. He doesn’t need to be told, he just does, and while he’s obviously not entirely pleased by the thought of having a gun fire right next to his ear, when Furiosa says “Don’t breath,” he doesn’t. She pulls the trigger. The spotlight shatters into the face of the Bullet Farmer. The ambient noise of the film is replaced by the high-pitched whine of Max’s dying ear cells (there’s a reason you might not be happy about someone firing a gun right next to your ear). He doesn’t complain, just gives his head a shake.

A lesser character in a lesser film, with a lesser writer or director, would have felt the need for their male title to try and reassert some dominance and masculinity after being used as a prop by the female lead. Maybe with an offhanded remark about how he “was just about to do that” himself, maybe claim that some blunt force trauma to his head which occurred in an earlier fight (while saving the lady’s arse, of course) had thrown off his aim. Not Max though, and not Fury Road. He doesn’t say much at all. Just gets up and joins the others in getting the War Rig moving again. Cause we’re not watching Max’s story, we’re watching Furiosa’s story from Max’s perspective. It is Furiosa’s ambition, strength and desire that propel the story forward and drives the action. Max’s role is to support her in this, keep her moving forward, and at the end point her in the right direction to achieve those ambitions.

It reminded me of my parents. The supporting relationship, I mean, not the gun play. Both of them have their own plans, dreams and ambitions. When one needs to do something to achieve their goals, the other is there to provide the moral and physical support necessary to do it. Of course a big part of those ambitions was raising me and my siblings right. Making sure we achieve what we want to achieve.

The movie is a master-class in ‘show, don’t tell‘ and it’s what makes this film such an absolute joy of stoic characters and insane action. One of those important things is the relationship between Max and Furiosa. It is Furiosa’s desires and ambitions that are ultimately achieved, but I believe she could not have achieved them without Max’s help. Right here I want to be very clear that this is not a statement against Furiosa. Some would call her the best female action hero since Ripley in Alien and Aliens. I would call her better. She’s smart, fierce and amazingly capable. As I said, she drives the action, the plot and the motivations of the other characters. Furiosa is the knight errant rescuing the princesses from the tower, but Max is her squire. An important part of a more important character’s story, providing an extra pair of hands to maintain their steed, an extra fighter when she’s driving, a driver when she’s fighting, the hardened reinforcement to keep moving forward when she desperately wants to turn around but knows it would be folly (you know the scene if you’ve seen the film… “under the wheels”) and in the very end the herald announcing the end of her quest and displaying the trophy of her victory. In return for helping the hero on her journey Max receives the things he lacked travelling alone through the wasteland. Respect. Companionship. Hope. A cause worth fighting for beyond survival. Identity. Someone to witness who he was, who’d also understand what he was. Empathy. The Wives.

Fuckin’ hell, I cannot stress just how important the wives are to both Furiosa and Max. I’d call those two each other’s moral compasses, but it is the Wives who are the north that both end up trying to reach. A few commentators and reviews of Furiosa have missed the fact that in her first face-to-face meetings with both Max and Nux she tries to put them both down. Unsurprising, considering the context in which she meets them (threatening her and the women she is protecting with a shotgun and sneaking through the Rig to kill her, respectively). In both cases, it is the Wives that influence her actions during and afterward. It is the fact that Max, a feral dog after years in the wasteland with only his hallucinations for company, only bares his teeth (and nicks their ride, admittedly) even after Furiosa presses that shotgun against his head and pulls the trigger. He doesn’t harm the girls beyond what could easily be argued was necessary for his own survival, and so she sees the potential in trusting him to protect the Wives in the next scene. Between this she is ready to gut Nux but the Wives stop her. They call him a confused boy and his death as unnecessary. After this, it is the empathy of one of these wives that sees a scared, lonely and confused Nux (who knows he cannot possibly rejoin the society that was his whole identity, his whole existence) change sides and fight to protect the women who showed him compassion. In the end he does not desire to ride through Valhalla, shiny and chrome, he wants to be remembered by someone who genuinely cared about him.

As for Max, well, by the end of the movie he may not be sane but his experience with the Wives has reacquainted him with a sense of justice that he thought was dead at the beginning of the story. He sees Furiosa, who wants to do more than protect them, and grows from that. She wants to give the girls a chance to grow, live, make their own decisions, be more than just property, live up to their true potential. Is it Maternalism? Maybe. Probably. It certainly contrasts pretty sharply against the toxic paternalism and patriarchy of Immortan Joe and his hyper-masculine death cult. But isn’t that what all good parents want regardless of gender? For their children to live, thrive, and reach their own potential? To be happy? I bloody think so.

That’s what I think this movie is about. Two parents helping, learning from and supporting each other to give their adopted children a chance that they never had (or in Max’s case, was never able to give to his biological child… if we assume this is the Max from the original). A victory of Parentalism over Paternalism and Patriarchy. That is wonderful.

It also has a guy playing a flame-throwing guitar on the back of a giant doof wagon. That is also wonderful.

2 thoughts on “Parental guidance, or why I loved Mad Max: Fury Road”